Undermined by ambivalent values, alternative comedians struggled to articulate truly distinct values or offer “any clean-cut break” from what had gone before.[1]

Lack of differentiation begs the question, what is so alternative about alternative comedy?

In the third season of The League of Gentlemen (Mark Gatiss, Jeremy Dyson, Steve Pemberton, & Reece Shearsmith, 1999-2017, UK) particularly in the opening episode ‘The Lesbian and the Monkey’ the lack of distinction from the past is especially prevalent. In the show, most female characters are played by the male stars, harking back to earlier comic forms from Shakespearean comedy to the Pythons. Male hegemony, discrimination and sexist attitudes abound in this episode, which is emblematic of past comedians, the alternative comics supposedly wanted to break from.

The ‘lesbian’ from the title of the episode refers to the character Pauline who is played by Steve Pemberton. Pauline is a fierce character who ruled over her male jobseekers with an iron fist (a cynical swipe at jobsworths and those who abuse what little power they have). In this episode she returns from jail, fornicates with, and falls in love with Mickey a former victim of her bullying. Mickey is the ‘monkey’ from the title, Ross labels him this because he is portrayed as having learning difficulties. Pauline also ends up having sex with Ross in this episode. Pauline in the first two seasons identified as a lesbian but here ‘she’ is reconfigured into the heterosexual matrix by getting married and having sex with men. Gender roles are parodied through exaggeration furthering mainstream alienation. The taboo language and risqué subject matter present an alternative to mainstream comedy, but it is also exclusionary towards women and atypical individuals. 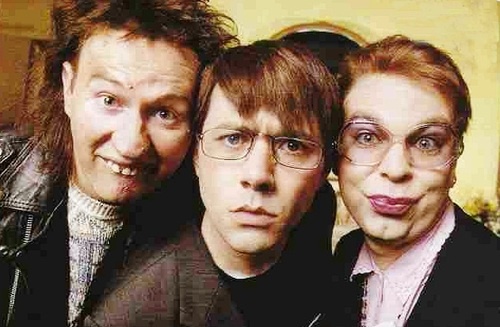 The comedy is satirical and ironic in tone but enables reductive attitudes by collaborating with rather than challenging earlier arguably ‘more offensive’ comic forms and attitudes.[2] Alternative comedy cannot ever be thought of as a fully separate because of historical influence and emulation.

(9) The Lesbian And The Monkey – The League Of Gentlemen – YouTube

[2] Schaffer, Gavin. ‘Fighting Thatcher with Comedy: What to Do When There Is No Alternative’ Journal, 284.